Twitter has been pushing hard over the past year to keep a healthy conversation on its platform after its Chief Executive Officer Jack Dorsey acknowledged the service's problems including hate speech and harassment.

In May 2018, the micro-blogging site introduced a new tool designed to analyze the behavior of accounts for potentially disruptive content and also announced a new policy to curb the spread of dehumanizing speech four months later.

It's hard to deny, however, that Twitter is far from being capable of cracking down on abusive speech, among others, or at least what's abusive for a particular user. That is why the social media company is now developing a new moderation tool that will allow original posters to hide replies to their tweets.

This has been confirmed by Michelle Yasmeen Haq, Twitter's Senior Product Manager for Health, after reverse engineering expert Jane Manchun Wong revealed the new "Hide Tweet" option located within the "Share" button on a particular tweet. 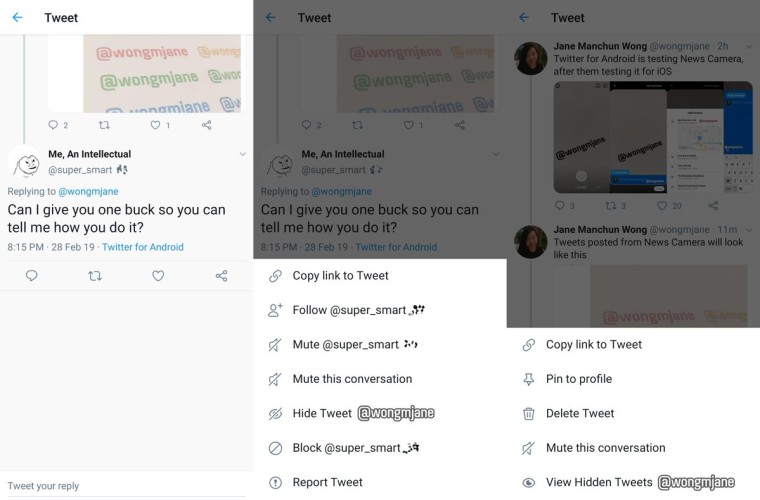 In a series of tweets, Haq explained the idea behind the new tool, saying this option is meant to help users protect their conversations. Although the original tweeter may choose to hide a reply, others will still be able to view the hidden tweet through a menu option. The moderation tool is set for public testing in the coming months.


You should also read:

Subscribe to our newsletter to get notification about new updates, information, discount, etc..

5 reasons you should never use less than 8GB of RAM on your PC. No 3 will shock you

10th November 2018
As applications become increasingly memory-hungry, a computer without enough RAM will quickly hit its limit. Because no matter how fast the processor or hard disk might be, insufficient RAM will slow down the whole system.

ALSO ON THE NEWS

Japan in another level with robot
20th December 2018

Subscribe to our newsletter to get notification about new updates, information, discount, etc..

TechNewsHub is an open online community of tech lovers. This is the one-stop place for everything tech- news, events, app reveiews, discoveries, etc.